The most widely spread kids belt system is from the International Brazilian Jiu-Jitsu Federation (IBJJF). Unfortunately this belt system only came out in 2012 so many schools had variations on this belt system and had to decide whether to switch their kids over to the new system or stay with their old one. There are even variations within the IBJJF belt system on whether the stripes should be given monthly or 3 or 4 times a year. So while the belts themselves would be given at the same spacing, the stripes can be different. At our academy in Broomfield, we follow the IBJJF belt system with monthly stripes which is probably the most common among academies. We feel that this gives the students the most consistent feedback.

Generally speaking the first 2 belts (White and White/Grey) take 6 months to achieve while every belt after those take a year each. These belts will rank a student from 4 years old until they turn 16 years old.

Then at the end of the month stripes are awarded. They will get a stripe wrapped around their belt. Generally this is a white stripe of either athletic tape or electrical tape. Brazilian Jiu-Jitsu belts look a bit different than other martial arts belts because they have a “sash” which is black fabric wrapped around the end of the belt between 5 and 7 inches long. This where the stripes go.

The white belt will have 5 stripes, each given at the end of the month. The 5th stripe is a red stripe wrapped around the white stripe. Kids love their red stripes! When a child has 5 stripes, then their next promotion will be to a Grey/White Belt.

The grey/white belt is the first of the Grey belts. Very similar in promotion schedule to the white belt. Students with this belt will get 5 stripes followed by their first solid color belt the Grey Belt. 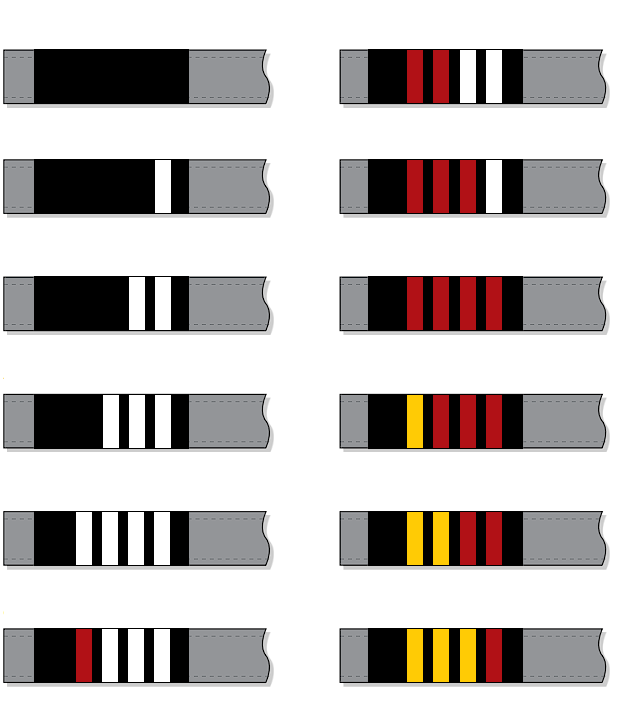 The grey belt and subsequent kids move up to taking 1 year to complete. Therefore they will have 11 stripes (4 white, 4 red and 3 yellow) followed by the next belt. So it will take 1 year to get through the first 2 belts and then a new belt each year of training after that. The first 5 stripes are just like the White Belt, but the 6th, 7th and 8th stripes will continue adding red stripes. Once the red stripes are complete then your child will receive 3 yellow stripes to fill up the belt. After getting all eleven stripes they will be ready for their next belt, grey and black.

Then to fill up the Green/Black will take 11 months on top of that and when the child turns 16 (academies generally don’t take students younger than 4 years old) they will get their adult belt of a blue or purple.

It is important to note that we don’t expect an 8 year old yellow belt to beat a 11 year old grey/white belt. Older kids generally learn skills more quickly and are stronger and faster. These belt systems develop a love of Brazilian Jiu-Jitsu and work ethic.

Moving to the Adult belt system

At the age of 16 a kid will move onto the adult belt system. They are then eligible to get a blue or purple belt. It is extremely rare for a 16 year old to move straight to purple belt. It will limit the amount of competitors that they will face in international competition because they won’t be allowed to compete against adults until they are 18 and there aren’t many under 18 year old purple belts.

There is no such thing as a Junior Black Belt in Brazilian Jiu-Jitsu. This is a becoming a common thing in other martial arts. This helps maintain the integrity of the art.