There are 3 main reasons why Brazilian Jiu-Jitsu (BJJ) is the best self defense martial art for kids.. The first reason is that most fights end up on the ground. If you look at police statistics or military studies most hand to hand combat situations end up on the ground. This is where Brazilian Jiu-Jitsu specializes. Where other martial arts focus on punches or kicks that look great, Brazilian Jiu-Jitsu focuses most of its time on where fights actually take place. It makes sense to spend more time devoted to where a fight would be won or lost. While we go over ways to take out opponents to the ground, it is important to know that even untrained combatants will end up on the ground or a grappling situation, so by having even a little bit of training they can give themselves a huge advantage in this area. 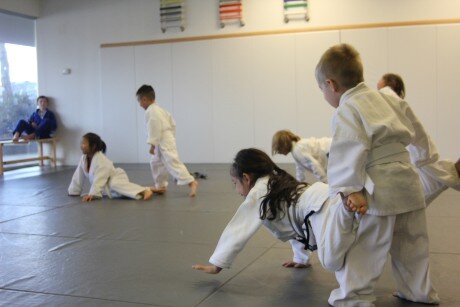 The second reason is that a grappling situation is often something that your child can not retreat from. If someone is trying to punch, kick or hit your child with an object children can often flee these situations unless heavily cornered. Children play chase and tag games as part of their development and find these games fun to help with their flight responses just as other animals do. But if someone grabs your child, shoves or tackles them to the ground, then that will be a situation that they can not easily escape. They will be in a grappling encounter whether they want to be or not. So Brazilian Jiu-Jitsu gives them the opportunity to chose whether to grapple an attacker and possibly submit them or limit damage or to escape from a situation that they would otherwise be forced to be involved in.

The third reason is that sparring or rolling takes place so that kids can train in a live situation and get a feel for what grappling with a resisting opponent is like. Kids martial arts often focus on katas or forms where the kids are punching or kicking the air, but never getting comfortable with an opponent actually resisting them with all their strength. Where there is sparring it has to be limited so there aren’t injuries. Plus if you look at the knockout rates of professional fighters weighing less than 145 lbs, you will see it is quite small compared to heavy weights. Children just don’t have the physical mass or strength to defend themselves with punching or kicking. So you could place your kid in a Tae Kwon Do school like I did when I was 9 years old, but the chance of injury is higher and the usefulness is lower. Some martial arts that do grappling focus on wrist locks and other small joint manipulation that is difficult to accomplish in an intense situation. Whereas even a small child has the strength to apply an armlock or a choke hold which will use the largest muscles of their body against their opponents smallest. This live rolling inspires real confidence that they can handle themselves if a situation were to arise. Real confidence changes their body language and will minimize the chance that they actually have to use their skills in a self defense situation.