If you looking for martial arts in Broomfield, there are a variety to choose from. Traditional Martial Arts such Tae Kwon Do and Karate. Then you have other striking arts like Boxing and Muay Thai and have modern self defense systems like Krav Maga. Finally you have grappling martial arts like Brazilian Jiu-Jitsu.

If you grew up in the 1980s and 90s, then movies like the Karate Kid caused a boon of Karate and Tae Kwon Do schools to open and flourish. I was one of those kids that his mom signed up in a Tae Kwon Do school. Honestly it was better than most with competitive instructors. Great for character development and discipline, these are some of the first that parents put their rambunctious children in. Based in Korea, Tae Kwon Do benefits from being an Olympic sport, but there are the downsides as well. Instruction is based off this ruleset so students don’t spar with punches to the face, just the body while kicks to the head are allowed. So you end up with stances with your hands at your side because you have to protect your chest protector to avoid being scored on. You learn some beautiful spinning kicks, develop great flexibility. Unfortunately none of that will work in a playground scrap for your child or a real self defense situation for yourself. Karate is similar with sparring including either no punches to the head or simulated pulled punches to the head. So generally something without realistic sparring and no grappling or ground game is going to be terrible for self defense. 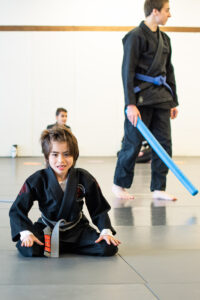 If you are looking to punch and kick things, then probably look to boxing or Muay Thai. There are some great benefits to cardio and confidence from each. The obvious difference being that boxing only involves punching while Muay Thai or Thai Boxing involves learning kicks, knees and elbows. You can develop some strong strikes from each of these. I think the main thing to determine going into it is do you like getting punched and kicked? If the answer is no, then you will probably end up in more of a cardio kickboxing class which is great for cardio, but I wouldn’t kid yourself that you are developing an actual skill in boxing or kickboxing. If you are just hitting bags and pads that don’t hit back, understand that that is just a small part of being a boxer or a kickboxer. If you are also interested in self defense, then understand that most self-defense situations end up on the ground and while Thai Boxing has a few throws and trips from the clinch, it isn’t often practiced and there is no ground game at all. Honestly I like both boxing and Muay Thai, sometimes just learning one like boxing would leave you more vulnerable to kicks because of the narrow stance and Muay Thai doesn’t have as much head movement as boxing, because if you plant your feet you get kicked. So if you like boxing or Thai boxing, great. It is important to be clear as to if you are doing it just for cardio or if you actually want to spar and get hit. I think there are too many people just hitting a bag or pads and thinking they are developing skill without testing it out in practice and getting that honest feedback. 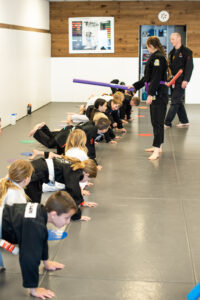 Then you have “modern” self defense systems like Krav Maga where you sort of use a variety of styles almost in a throw back to Bruce Lee’s Wing Chun, but an urban survival flair. Generally this falls into the same traps of Tae Kwon Do of not being able to spar realistically because you are being taught to do eye gouges and groin strikes so you can’t train that at 100% speed or resistance. I know folks who have let people try to use their realistic self defense moves on them such as letting someone try to rip off their ear. It didn’t work. So you are left with a ton of confidence that you deadly martial art works without actually knowing if it works or not.

Brazilian Jiu-Jitsu has many of the best attributes of getting you in great shape and actually provides the best self defense because most self defense situations end up in a grappling situation like on the ground or in a standing clinch. You get real feedback when you train and apply submissions so you know whether you won or lost each time you are training, without taking actual hits to the head like Boxing or Muay Thai. Brazilian Jiu-Jitsu was popularized by the Grace Family in Brazil and made famous in the UFC. The cons of Brazilian Jiu-Jitsu is that while it is extremely effective, it does involve close contact with others so if you aren’t comfortable with that you may want to veer to a striking art. It is probably a little more difficult to learn because you are doing grappling you have to do some 3D problem solving and learn to move in ways that aren’t as easy as standing up and throwing a punch. I think you probably deal with a little bit of a more humble crowd because everyone has lost countless times on the mat so you learn to let go of your ego a bit more. You want to be a little careful and check out the kids programs of Brazilian Jiu-Jitsu places individually, sometimes the MMA vibe can rub off on some places and they aren’t teaching good values in the program as well as effective martial arts.

So I think Brazilian Jiu-Jitsu is the best fit for most people who want a great workout where they develop real skills that can best tested without risk of getting a concussion. That being said, I have had family members who tried Brazilian Jiu-Jitsu and they didn’t like being that close to other people so they moved to more of a cardio kickboxing thing. Awesome!  I have recommended family members in other cities to more traditional martial arts when I knew they were just looking for character development and I was a bit sketched out when I heard about how the kids classes were run.